CARDIFF: CREATIVE COLLABORATION
This post was written by Caroline Goffin. Caroline is co-director, with Dominic Rai, of Salt of the Sarkar.

We’re thrilled to report back on our consultation meeting at Firing Line Museum at Cardiff Castle. We shared our project and our plans for 2019 and beyond with an enthusiastic group from South Wales. They represented a wide sweep of cultural organisations, venues, projects, communities, schools and those with a serious interest in the First World War, and came with an interest in discovering more about the relevance of the soldiers from Undivided India in World War One in today’s divided world and how this might be shared in Wales.

Now we’re meeting funders/sponsors to bring an Exhibition of Photographs to Firing Line Museum in Spring 2019. The images were taken by pioneer press photographer Horace Grant of the Daily Mirror in 1914. They document the arrival of the Undivided Indian Army in Marseilles for service on the Western Front as told in chapter one of the novel Across the Black Waters by Mulk Raj Anand.

The project will include accompanying events for schools and local communities in  Cardiff and beyond, and then be available for touring.

WHY:  There is much to be found that is relevant to encouraging respect, reconciliation and peace in our
communities through the experiences of Empire soldiers over a hundred years ago. 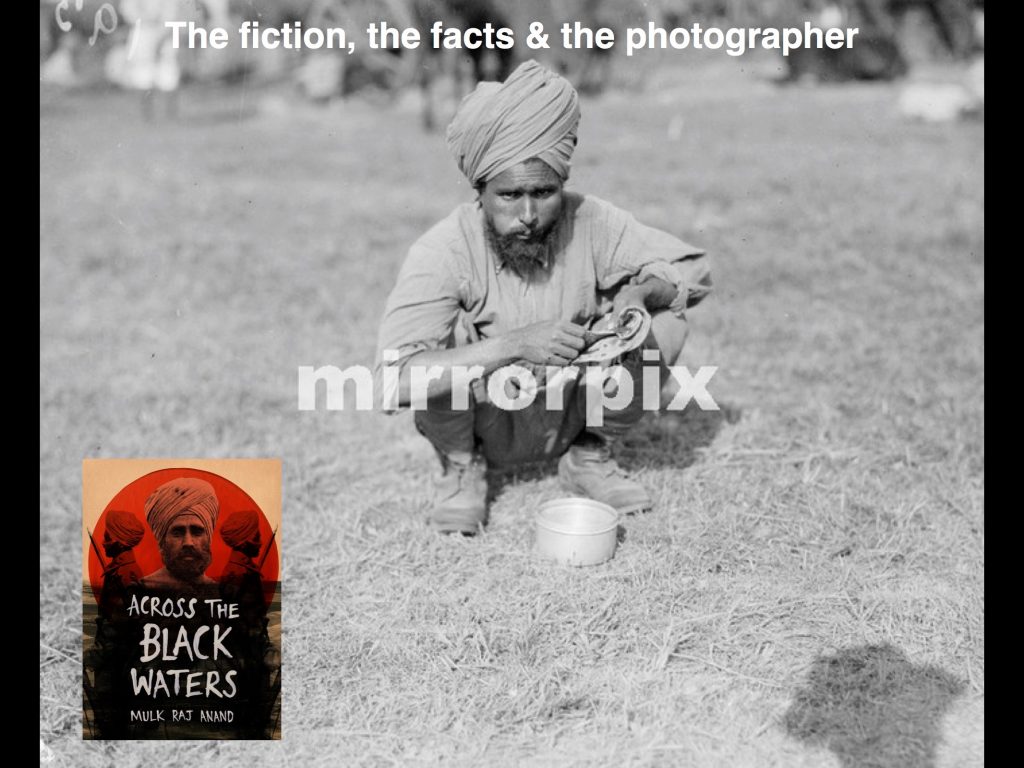 The response has exceeded our expectations with excellent feedback, questions and suggestions from those who attended. There was plenty of enthusiasm for reaching young people in schools, and two members of our audience are now keen to share images and family stories relating to the Indian Army as a result of attending the event. Many others have suggested creative ways they would like to be involved too.

Insole Court, Cardiff
https://www.insolecourt.org/about
Pop up exhibition 4-18 November 2018
”Our pop up Gallery will showcase a selection of images taken of Indian soldiers on the western front, taken by pioneering photographer, Horace Grant. The exhibition is the latest milestone in the Salt of the Sarkar project, that combines powerful historic imagery with the novel, ‘Across the Black Waters’ by master storyteller Mulk Raj Anand.”

Cornerstone Cardiff
http://cornerstonecardiff.org
Schools workshops 22-23 October, 2018
“As Heritage Co-ordinator for Cornerstone, Cardiff, I am delighted to be associated with this project, and in particular the creation of a Children’s Workshop on this topic.”

Kitchener Primary School
http://www.kitchenerprimaryschool.com/welcome/
Remembrance Day presentation at the school planned for 9 November 2018
Viscount Kitchener was Commander-in-Chief, India 1902-1909.
He is referred to in the novel Across the Black Waters
Memorial Reredos for Lord Kitchener in St John the Baptist Church, Cardiff

THE INVITATION WE SENT OUT:
Join us on a journey to bring a major exhibition and engage creatively with the little-known story of soldiers from Undivided India arriving on the Western Front at the start of World War One. Discover a message for our own increasingly divided world. The soldiers of the Indian army, sent for the very first time to fight in Europe in September 1914, included men of different ethnicities, religions and speaking different languages. We learn of a human story of respect, collaboration and suffering at the start of The Great War that changed the world forever.

WHY:  There is much to be found that is relevant to encouraging respect, reconciliation and peace in our communities through the experiences of Empire soldiers over a hundred years ago.

SOME OF THE INDIVIDUAL RESPONSES RECEIVED

Rachel Silverson, Curator Firing Line Museum at Cardiff Castle
http://www.cardiffcastlemuseum.org.uk/museum.php
The Firing Line Museum is delighted to be working in collaboration with the Salt of the Sarkar project and are excited to help uncover the stories of Indian Soldiers during the First World War.

It was wonderful to host the community engagement event on 7th August and to be surrounded by so many creative and enthusiastic individuals who want to help share these hidden histories. What resonates is that regardless of differences in political and religious beliefs, these experiences and memories are shared and history has a powerful tale to tell”. 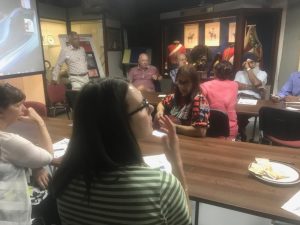 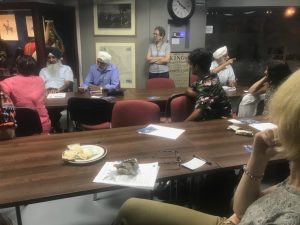 Graham Hill, Business Manager Insole Court
Insole Court is proud to be a collaborator on the Salt of the Sarkar project. The combination of powerful photography of meaningful storytelling will connect our visitors to an often overlooked chapter of our shared heritage. We look forward to sharing these stories with visitors from across Cardiff and beyond, starting with a pop up exhibition in November 2018.

As Insole Court remembers the sacrifice made by Claude Insole, who died fighting in 1918, this collection of images commemorates all those who served, in the ‘war to end all wars’ and previews future events of Salt of the Sarkar. 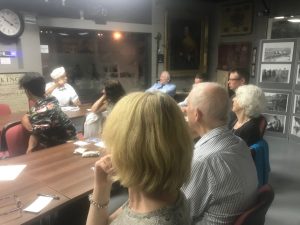 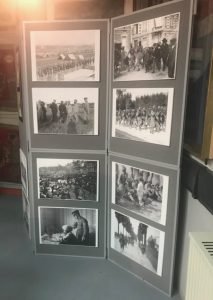 Lucy King Heritage Co-ordinator at Cornerstone Cardiff
The “Salt of the Sakar” project offers a unique perspective on a little known aspect of the Great War – the role of the Indian Army in the fight for peace in Europe. The juxtaposition of military history with the  personal stories of families through letters and traditional folk songs provides a striking historical and cultural insight that will bring alive this piece of history for children and adults alike.

As Heritage Co-ordinator for Cornerstone, Cardiff, I am delighted to be associated with this project, and in particular the creation of a Children’s Workshop on this topic. I very much hope to be able to host a “Salt of the Sarkar” event here very soon. 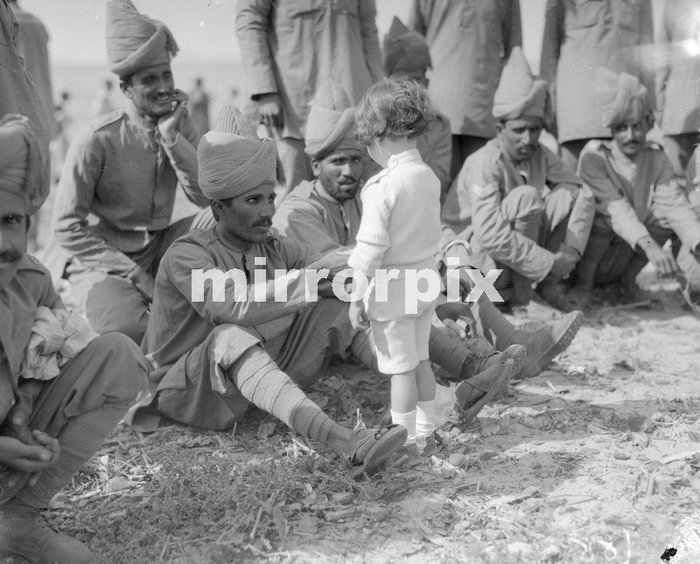 A French boy introducing himself to the Indian soldiers at their Rest camp on the race course at Marseilles, France, 30th September 1914

Richard Symons, Cardiff Citizen
The Salt of the Sarkar project is playing a key role in highlighting and commemorating the enormous and vital contribution made by the Indian Army in the First World War.

Nic Bowler, Academic and Citizen Activist from Swansea
I was moved by what I learnt about the plight of Indian soldiers in World War 1. The event showcased a project which seems accessible to anyone from India, the UK or allied nations who cares about peace, reconciliation and community cohesion.

Suzy Bowers, Coordinator of First World War – Steel Remembered)
http://www.steelremembered.org
It was so interesting to find out more about the project and the soldiers and I felt quite overwhelmed by the letter from the little girl to her father. The letter could have been written by any child to her soldier father and it showed  that whatever religion or culture the soldier was from, the feelings of longing for home were the same in any language.

I am intrigued by this exciting project that offers a unique insight into the lives of the Indian soldiers. It will show their lives not just from a military perspective but also from a personnel one. The project will break down cultural and religious barriers to allow the soldiers stories to be told.

Gurmit Singh Randhawa MBE, President Sikh Gurdwara Cardiff
http://sikhgurdwaracardiff.com
It was my pleasure to attend this event. As a lay person and working with community it made me aware of the loss of life and the foundation the war had laid for the community cohesion and love and respect for each other.

This event highlighted the importance of the contribution that was made by individuals irrespective of their race or colour to uphold the right against wrong and respect for each other and, had this been followed and continued by successive governments since, perhaps there would not have been any racial tensions within the community seen too often. 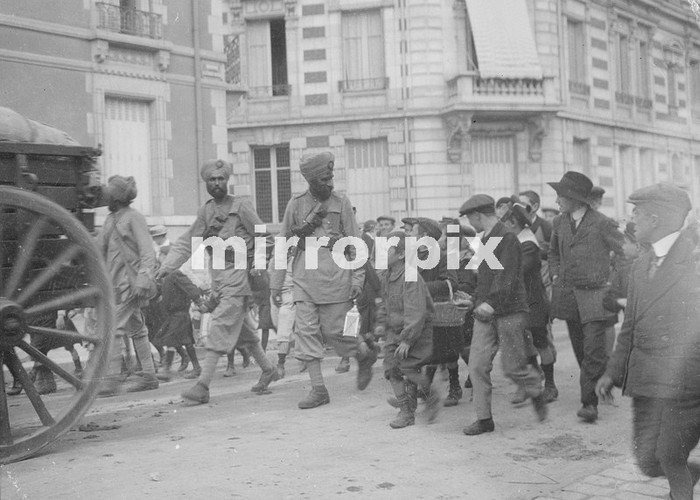 School children seen here following the soldiers of the 3rd Lahore Indian Division through the streets of Orleans. September 24th 1914 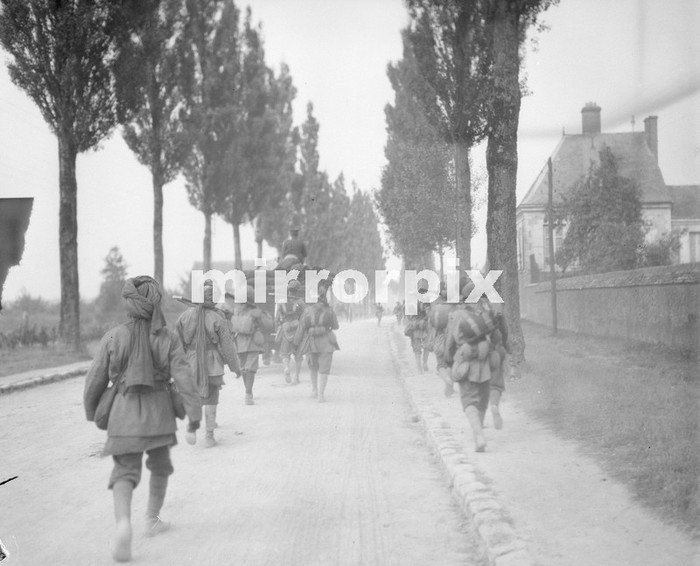 Elements of the 3rd Lahore Indian Division seen here moving up to the front. Circa October 1914

Maj. Dan Clayton Jones OBE, K St J, TD, DL,
Former Deputy Chair, Heritage Lottery Fund UK
Knowing little, or nothing of the involvement of troops from the Indian Sub-Continent in WWI, what emerged from the discussion, illustrated by the pioneer photography of Horace Grant, was a revelation!

Within a month of the outbreak of war in August 1914, hundreds of thousands of professional soldiers from Imperial India were fighting on the Western Front in Flanders.

This number increased to well over a million soldiers as the war progressed, drawn from every creed, caste and corner of what was then part of the British Empire. The sacrifice, suffering, bravery and loyalty of this “Indian Army”, fighting in a war which had little to do with them, thousands of miles from home, has largely been forgotten, or worse “erased from history”!

Their story deserves to be told, and a hundred years on, we should recognise the debt that we, the British, owe to these men.

I hope the research which is now being undertaken will lead on to a much fuller understanding of the role of the Indian Army in the “War to end all wars”, through exhibitions, meetings and documentaries on TV and radio .It is a history that must be told !

OUR WARMEST THANKS TO OUR HOSTS AT FIRING LINE MUSEUM, CARDIFF CASTLE